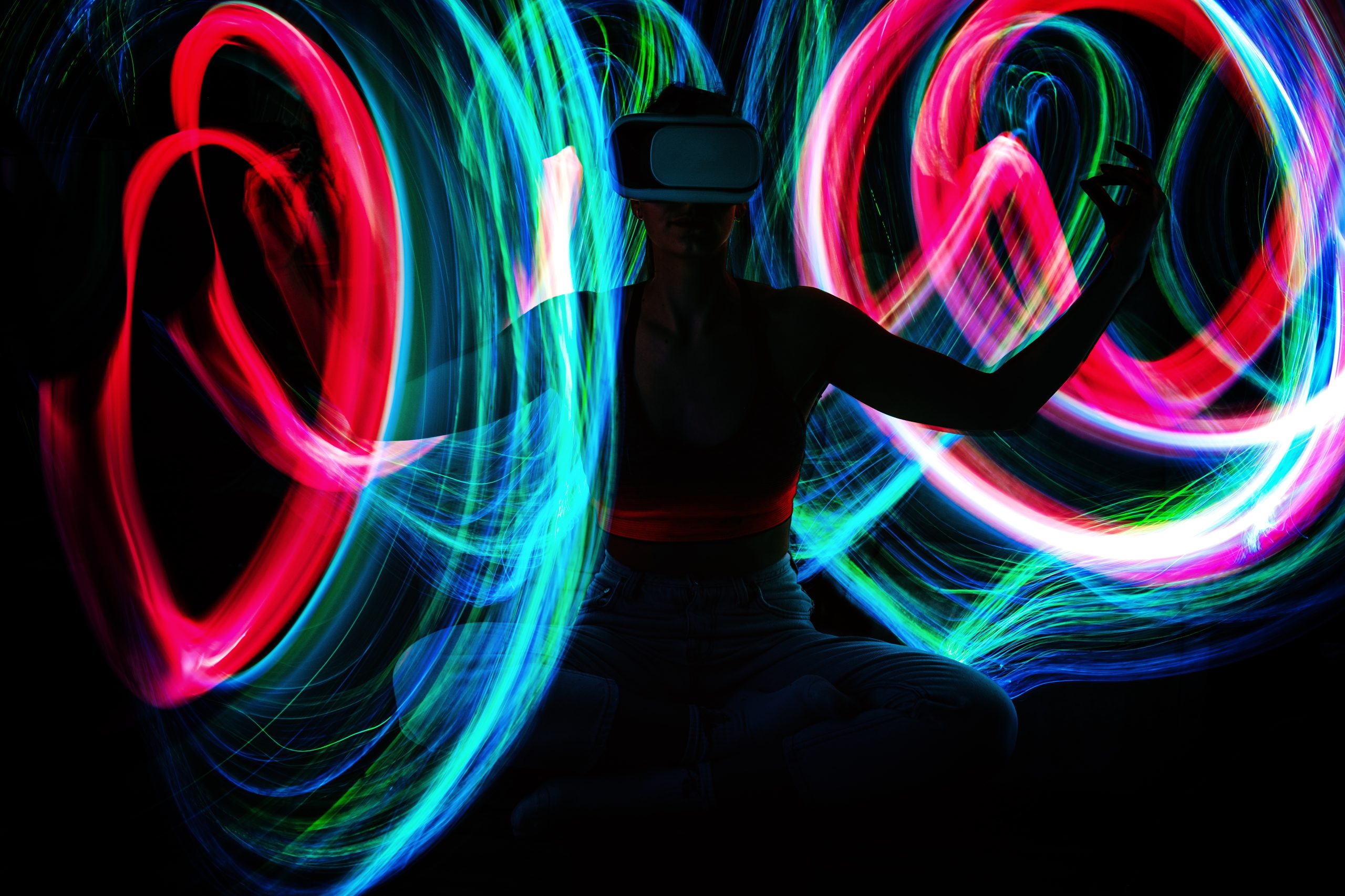 Steven Spielberg’s 2018 movie, “Ready Player One,” portrays a dystopian world in which society has moved mostly online. Three years later, we learned that this imagined cyber environment—hopefully not dystopian—was being built as the ‘metaverse,’ and that Meta (the company formerly known as Facebook) was positioning itself to be a dominant player in this new market.[1]https://www.abc.net.au/news/2021-10-29/facebook-rebrands-as-meta-to-harness-virtual-reality-in-future/100578908

Recently, Mark Zuckerberg, the founder of Facebook and Meta, predicted that the metaverse will become a $100 billion plus commercial platform with a billion people spending “hundreds of dollars each” on “digital goods” and digital content, such as “clothing for their avatar,” “digital goods for their virtual home” and “things to decorate their virtual conference room.”[2]https://www.cnbc.com/2022/06/22/mark-zuckerberg-envisions-1-billion-people-in-the-metaverse.html Individuals are buying up “land” in the metaverse,[3]https://futurism.com/the-byte/man-life-savings-metaverse-land retailers are already buying virtual shop space,[4]https://www.bbc.com/news/business-61979150 and Meta has launched a “designer clothing store for avatars.”[5]https://indianexpress.com/article/technology/crypto/meta-announces-digital-designer-clothing-store-for-avatars-in-the-metaverse-7977031/ Meta is also training metaverse workers with newly launched Metaverse Academies in France.[6]https://www.rfi.fr/en/france/20220612-facebook-announces-launch-of-metaverse-academies-across-france The company hopes to capture a piece of these transactions with its Meta Pay digital wallet system.[7]https://www.theverge.com/2022/6/22/23179058/mark-zuckerberg-meta-pay-wallet-metaverse-details

There will, no doubt, be many challenges to establishing a fully functional metaverse. This article serves to facilitate discussion concerning several potential key problems.

Perhaps the metaverse’s biggest issue is that most people don’t even know what it is. An Axios survey found that about two-thirds of respondents “weren’t exactly sure” what the metaverse is, and that most were neither excited nor concerned about it.[8]https://www.cnbc.com/2022/07/01/ex-google-ceo-eric-schmidt-theres-no-definition-of-the-metaverse-yet.html Former Google CEO Eric Schmidt suggested that the problem is larger than this. At the Aspen Ideas Festival in July, he said that among the people and companies building the metaverse, “there isn’t an agreement on what the metaverse is.”[9]https://www.cnbc.com/2022/07/01/ex-google-ceo-eric-schmidt-theres-no-definition-of-the-metaverse-yet.html

At its most fundamental level, the metaverse is an area for people to live, play and work online. It will likely be enabled by virtual and augmented reality and be an immersive environment, like the online space in “Ready Player One.”

According to Meta, “the metaverse will feel like a hybrid of today’s online social experiences, sometimes expanded into three dimensions or projected into the physical world. It will let you share immersive experiences with other people even when you can’t be together—and do things together you couldn’t do in the physical world.” [10]https://about.fb.com/news/2021/10/facebook-company-is-now-meta/ What exactly this is, though, is still unclear. Perhaps it could become “the future of the internet,” wrote Eric Ravenscraft in Wired magazine, or “a video game” or “a deeply uncomfortable worse version of Zoom,” noting that since Meta’s announcement “what that term means hasn’t gotten any clearer.”[11]https://www.wired.com/story/what-is-the-metaverse

Perhaps the most important question is whether the metaverse will be a single system in which users can easily jump among areas (perhaps called virtual “worlds”) using a single interface and login. Right now, numerous online immersive and interactive systems are considered part of the metaverse. However, these have different interfaces, user accounts and hardware support capabilities. Certainly, the current-day metaverse falls short of the online environment in “Ready Player One” in terms of the consistency of user experience. What the future holds remains vague.

Government in the Metaverse

While the question of whether the metaverse is or becomes one environment; a collection of environments; or a name for certain types of competing, and perhaps even incompatible, systems is complex, this is not the most daunting issue. Several broader questions—relating to how society functions in an online environment—demand consideration.

The first is the role of government. While the metaverse is virtual, its servers, payments and users exist in the physical world. The locations of corporations, workers, servers and users create connections to the laws of numerous countries and, within the U.S., state and municipal jurisdictions.

The metaverse will, thus, barring significant political actions, operate subject to a patchwork of legal environments. While big companies, such as Meta, might be able to navigate this complex regulatory environment successfully, smaller businesses—such as those buying up virtual land—might find it far more difficult. System users might also become ensnared in the laws of distant lands. For example, imagine a scenario where a user steals from another player as part of a metaverse role-playing game. While this may be an accepted part of gameplay, because the stolen assets have value—they can be bought and sold—theft in the virtual world could involve lawsuits or criminal prosecutions in the real world. Some liability could be disclaimed via contract: You can’t claim that something is stolen, for example, if you agreed to permit theft when you signed the agreement to play the role-playing game. However, this is a complex, multilayered arena upon which considerable focus must be placed.

Another question is access to records. When all actions are online, they can be easily recorded and subject to government review. What would stop governments from using the environment’s technology to covertly surveil its citizens in order to facilitate enforcement for even the most minor infractions in the virtual world? Technologically, the answer is very little. For those who worried that Big Brother might follow cars around with drones to issue tickets, the metaverse is the next potential frontier of surveillance-enforcement. Even the most basic right to privacy is challenged when every action and interaction is stored on corporate servers readily accessible to the (perhaps more correctly, every) government. Because of this widespread access, multiple governments might seek to enforce their—potentially conflicting—laws ubiquitously within the online environment, creating legal chaos.

Companies operating in the metaverse will also have to be acutely aware of the physical location of users to avoid violating trade restrictions and tariffs. Government restrictions on online access and interacting with citizens of other nations might prevent some users from accessing various online possessions and conducting proscribed transactions. Of course, users may conduct these illegal transactions unwittingly, if metaverse operators don’t alert them to users’ locations and applicable restrictions, or automatically block them.

In an extreme situation, parts of the metaverse may end up duplicated and operating independently if servers and users in one country or region and those in another are prevented from communicating with each other, and both have an operating copy of a virtual world from before the links were severed. This could cause the duplication or reappropriation of digital assets, in addition to considerable user confusion and a multitude of related issues.

Like all new technologies and business frontiers, the metaverse carries significant potential benefits and risks. For companies, a pervasive online environment means access to customers and workers all over the world. Online employment may be particularly valuable to individuals from regions with lower wage levels, who would enjoy substantially higher wages in a global workplace. However, these same forces would tend to lower wages in areas that have typically enjoyed higher income levels.

Other risks include the uncertainty of government regulations, concerns about both corporate and governmental surveillance, and questions regarding the ownership of basically everything (including even digital ‘memories’) in the online environment. Ensuring the physical health of users, who might become somewhat sedentary while spending huge amounts of time online, is also a major area of concern. Even basic questions regarding who will provide online neighborhood policing and similar services (which typically fall under government jurisdiction) remain unanswered.

The answers to these questions will be key to how (and even if) people live and work in the metaverse. More fundamentally, early regulations and practices will help define the next potential age of human civilization.

Jeremy Straub, PhD, is an Assistant Professor in the North Dakota State University Department of Computer Science and a NDSU Challey Institute Faculty Fellow. His research spans a continuum from autonomous technology development to technology commercialization to asking questions of technology-use ethics and national and international policy. He has published more than 60 articles in academic journals and more than 100 peer-reviewed conference papers. Straub serves on multiple editorial boards and conference committees. He is also the lead inventor on two U.S. patents and a member of multiple technical societies.