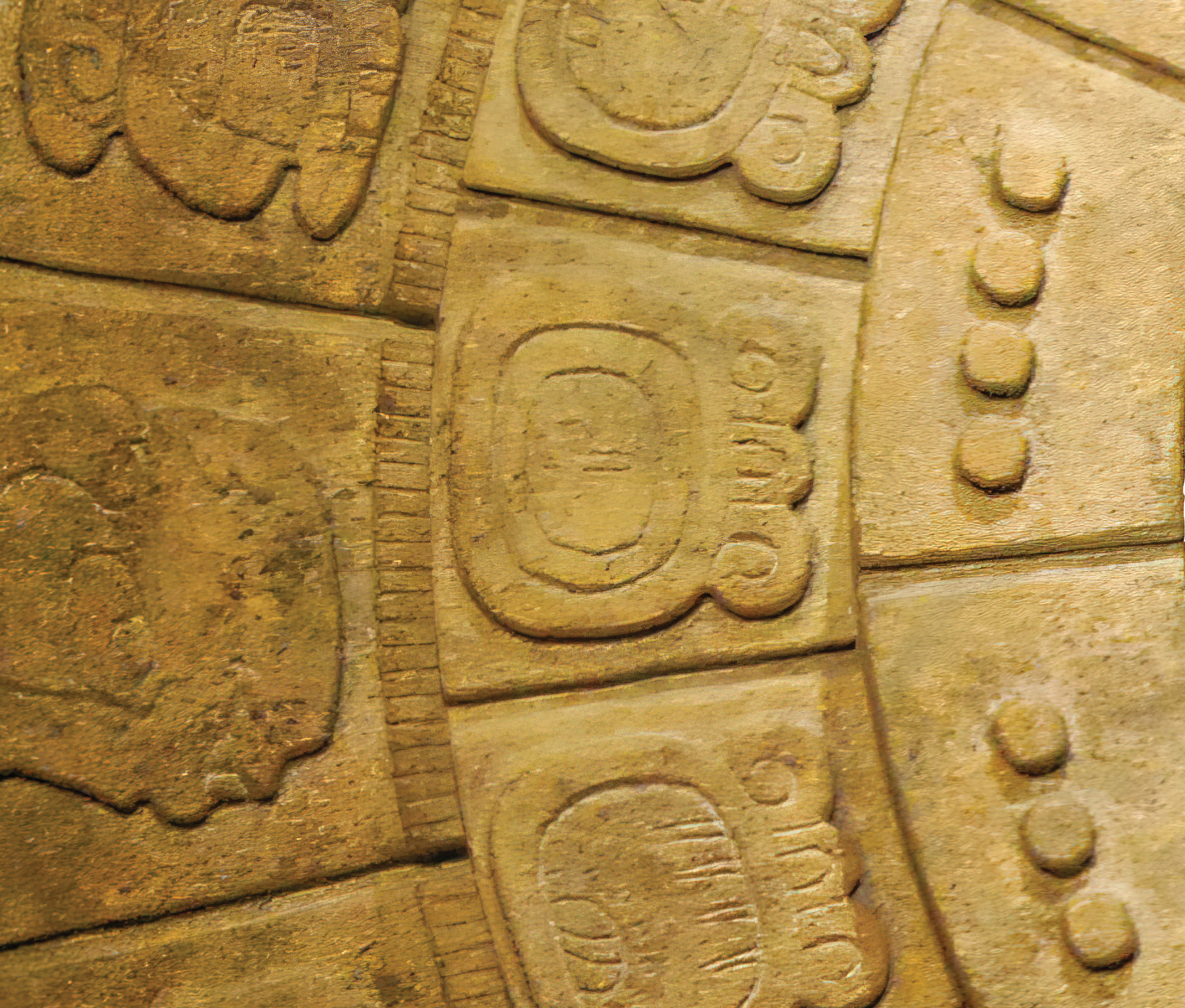 Ancient peoples and places might seem far removed from the world of computers, the internet and other modern, but we share more with our human ancestors than not.

When we think about the Maya people—whose earliest settlements date back to at least 1800 BCE—of southern Mexico, Guatemala, Honduras and Belize as occupying a world of grand pyramids and religious rituals, those associations are certainly true. However, the ancient Maya were also fascinated by mathematics and observations of the natural world, calculating the positions of the stars and planets. Although the Maya did not have digital technology, the precise calculations they undertook are precursors to today’s world of scientific computing.

The ancient Maya calendar is intriguing and enigmatic because it is one of the most complex systems for marking time ever developed. The calendar consists of several cycles, usually referred to as “counts,” that overlap. A 365-day solar year is called the Haab’ and a set of 260 days is called a Tzolk’in. (The pronunciation of Maya words can be approximated by sounding out the words phonetically in English, with a glottal stop where the apostrophes are located.) Because these sets of days vary in length, their beginnings only align with each other once every 52 years. This is called the “calendar round,” and each time it occurs it becomes a defacto marker of cultural change over time, similar to how Americans think about the passing of centuries. Although Maya people today primarily use the Gregorian calendar, as does most of the world, the calendar round remains in use in Guatemala as a secondary way of tracking the passage of time.

Making matters a bit more complicated, there is also a second calendrical system, which is overlaid on top of the calendar round, called the “long count.” It is a way of marking the number of days since creation, 4 Ahaw, 8 Kumk’u (August 11, 3114 BCE in the Gregorian calendar). In modern Western systems of counting, we primarily use base ten—probably derived in prehistory from the number of fingers on our hands. Computer scientists, of course, are also familiar with counting in binary for circuitry-level computer science and hexadecimal for digital computation. The Maya, however, mostly used base 20 for their calendrical computations—probably derived in prehistory from the number of fingers plus toes.

The technology that the Maya used to complete the complex calculations needed for understanding the calendar was simple—paper books with data tables—but its usefulness was profound. Tragically, after the conquest of Mexico by the Spanish during the 16th century, most Maya books were destroyed. Indeed, only four survived this purge. The rest were burned, along with much of the indigenous art, which had been deemed heretical by Franciscan missionaries.

One of the surviving books, the Dresden Codex, is filled with data tables used to calculate the movements of the planet Venus, as well as solar and lunar eclipses. This accordion-folded book was made from beaten tree bark and coated with a thin layer of stucco to make the surface smooth for writing. Unfolded, the 78-page document stretches for 3.7 meters. It is a proto-scientific record that intersperses fantastical animals and plants with numerical data.

Although the numerical form is different than what Americans are familiar with—we use Arabic  numerals that originated in the Middle East and North Africa during the Middle Ages—we can begin to intuit the intent of the book with just a small amount of knowledge of Maya math.

The Maya numerical system for recording numbers is based on tallies of dots and bars, and its digits function somewhat like Roman numerals. In this system, a dot indicates one and a bar indicates five. Zero is indicated by a shape that looks like a football or a flower blossom.

This is particularly notable historically, as zero is a difficult concept for people to intellectually grasp. It was not understood in the Western world until the 13th century when Fibonacci introduced it to Europe with the other Arabic numerals that we still use today. It is a positional system in base 20, so the largest set of digits in a single position is three bars and four dots, which tallies to 19. With this basic understanding of the notational system, the Dresden Codex starts to make   sense.

The Maya language is alive and well today in oral form—there are about six million native speakers and 30 dialects—but sadly the tradition of writing in Maya hieroglyphs was lost during the colonial era. The book burning, paired with the suppression of the indigenous political system and religion, meant that knowledge of Maya hieroglyphs did not last through the end of the 18th century and had been mostly forgotten long before.

This story has a happy ending, however, as today we can once again read the words of ancient Maya people. The mathematical data in the Dresden Codex and modern codebreaking proved to  be the keys for recovering this system of communication.

The decipherment of the Dresden Codex is intertwined with its history of ownership, and it is one of the most important Maya documents ever scrutinized by scholars. The early history of the codex is poorly understood, but it was likely created 900 or more years ago near the city of Chichen Itza in Mexico. It was perhaps sent to Europe by Hernan Cortes as a cultural curiosity during the conquest of Mexico, about 500 years ago, then passed down through private collections until it entered the Royal Library at Dresden in 1744 CE.

The great scientist Alexander von Humboldt studied the Dresden Codex and then published several pages of the codex in his magnum opus on the Americas in 1811. This volume has been part of scholarly discourse ever since. The first person to understand that the dots and bars represent numbers was the eccentric intellectual Constantine Rafinesque, who published his ideas in 1832. By the late 19th century, a full facsimile of the book was published by the librarian Ernst Förstemann, who was able to decipher the numerical and calendrical information.

Scholars struggled to decode the broader set of Maya hieroglyphs for decades until linguists imagined themselves to be codebreakers. This was perhaps unsurprising, given that the zeitgeist of the 20th century celebrated decryption, epitomized by the work of the computer’s inventor, Alan Turing. His decipherment of German top-secret messages during World War II, which had been encrypted with the Enigma machine, helped the Allies to win the war.

The key to “codebreaking” the Maya script was accomplished with a document that functioned like the Rosetta Stone for deciphering Egyptian hieroglyphs. In 1566 CE, Diego de  Landa, a Franciscan friar, wrote a mistaken explanation of how Maya hieroglyphs worked. He  asked a Maya scribe to write hieroglyphs that corresponded to the Spanish alphabet. This task, however, was impossible because the Maya system of writing uses symbols for syllables that  represent the sounds of consonants and vowels together, while written Spanish pairs letters together to evoke such sounds.

The Maya scribe, nonetheless, tried to do as he was asked, and the result was a list of hieroglyphs that referred to Maya words that sound similar to the names of the letters of the alphabet in Spanish. For example, the letter “B” in Spanish and the Maya word for road are both pronounced “beh.” The hieroglyph for a road in Maya consists of a picture of a foot on a pathway, which is what the scribe drew next to the letter “B.” This alphabet was used over the course of the 20th century as a starting point to decode the ancient writing. Amusingly, in addition to the alphabet, the scribe infamously wrote a phrase on Landa’s manuscript that translates as “I don’t want to”—hinting at the frustration he must have felt.

Using Landa’s manuscript as a starting point, a community of scholars, which included Michael Coe, Yuri Knorozov, Simon Martin, Peter Mathews, Tatiana Proskouriakoff, Linda Schele and J. Eric Thompson, analyzed the glyphs with an approach that is similar to solving cryptograms or breaking ciphers. The result is that most of the glyphs have now been decoded, and we can once again understand the world of the ancient Maya peoples in their own words. Their writing includes royal genealogy, records of warfare and even poetic language. When a ruler died, for example, we know that the Maya said that the person’s “white flowery breath” was gone.

The ancient Maya world may seem distant from us in the 21st century, when we intentionally  encrypt and decode so much data, but we can be grateful that the work of scholars who use modern technology can enable us to understand the data and mindsets of the past. As we look to the future of research on the Maya, it is clear that using technology is now an important strategy to enhance our understanding of these people. Greg Reddick, a software engineer, has created software to convert dates between the Maya and Gregorian calendars. Also, the Foundation for the Advancement of Mesoamerican Studies has organized the Mesoamerican Language Texts Digitization Project to make materials for research readily available online. Perhaps most significantly, airborne Lidar technology (described in the graphic on page 34) is revolutionizing our understanding of the Maya and other civilizations, especially if their cities and other remnants were engulfed by jungle. Previously, estimates of Maya populations were low enough that experts concluded that their sociopolitical complexity was likewise modest. Recent discoveries of massive numbers of structures in northern Guatemala, including homes and temples, along with “a complex system of raised roads and causeways enabling travel between urban centers, reservoirs, irrigation and terracing,” indicate a far more sophisticated culture and society with perhaps millions of residents.

Humboldt, Alexander von. 1814. Researches, Concerning the Institutions and Monuments of the Ancient Inhabitants of America, with Descriptions and Views of Some of the Most Striking Scenes in the Cordilleras. Translated by Helen Maria Williams. London: Longman, Hurst, Rees, Orme & Brown, J. Murray & H. Colburn.

Leavitt, David. 2006. The Man Who Knew Too Much: Alan Turing and the Invention of the Computer. New York: W.W. Norton.

Machulak, Erica. 2018. “Texting in Ancient Mayan Hieroglyphs: What Unicode Will Make Possible.” Humanities: The Magazine of the National Endowment for the Humanities 39 (1). Available online: https://www.neh.gov/humanities/2018/winter/feature/texting-in-ancient-mayan-hieroglyphs.

Rafinesque, Constantine. 1832. “Second Letter to Mr. Champollion on the Graphic Systems of America, and the Glyphs of Otolum or Palenque, in Central America—Elements of the Glyphs.” Atlantic Journal and Friend of Knowledge 1 (2): 40–44.

Travis Nygard, PhD, is an Associate Professor of Art History at Ripon College. He earned a PhD in the History of Art and Architecture, a PhD Certificate in Cultural Studies and an MA in the History of Art and Architecture, all from the University of Pittsburgh. He earned a BA in Art History from Gustavus Adolphus College. He is fascinated by intellectual and cultural history, and his scholarship focuses on both ancient Maya and modern Midwestern art. His career began as an intern at the Memorial Union Gallery at NDSU; he has published pedagogical research with faculty and graduate students in the Department of Computer Science at NDSU. Professor Nygard coedited Landscapes of the Itza: Archaeology and Art History at Chichen Itza and Neighboring Sites (University Press of Florida, 2018), in which he coauthored “To Face or to Flee from the Foe: Women in Warfare at Chichen Itza.” With a research team at NDSU, Professor Nygard wrote “Social Sensitivity Correlations with the Effectiveness of Team Process Performance: An Empirical Study,” published in the Proceedings of the 8th International Conference on Computing Educational Research (2012).