Robophobia: Work in the Age of Robots

The nation today is still recovering from the unprecedented effects of widespread shutdowns in response to the coronavirus. After achieving a record low level of unemployment prior to the pandemic, economies everywhere have returned to the challenge of rebuilding. Many pundits and futurists now claim that the labor-savings about to come from algorithms, artificial intelligence (AI), automation and robots, will take so many jobs that employment levels will never recover.

In response, this will require, the proponents argue, the creation of a universal basic income, not just for the temporarily unemployed, but for those doomed to be never-again-employable. We’ve seen this movie more than once.

In 1961, President John F. Kennedy delivered a message to Congress focused on what he called “the inevitability” of job destruction from automation. He created an Office of Automation and Manpower and proposed that Congress fund training programs and create a readjustment allowance for displaced workers.

A few years later, President Lyndon B. Johnson convened a blue-ribbon commission on the impact of automation on work. One of its recommendations: a universal basic income. 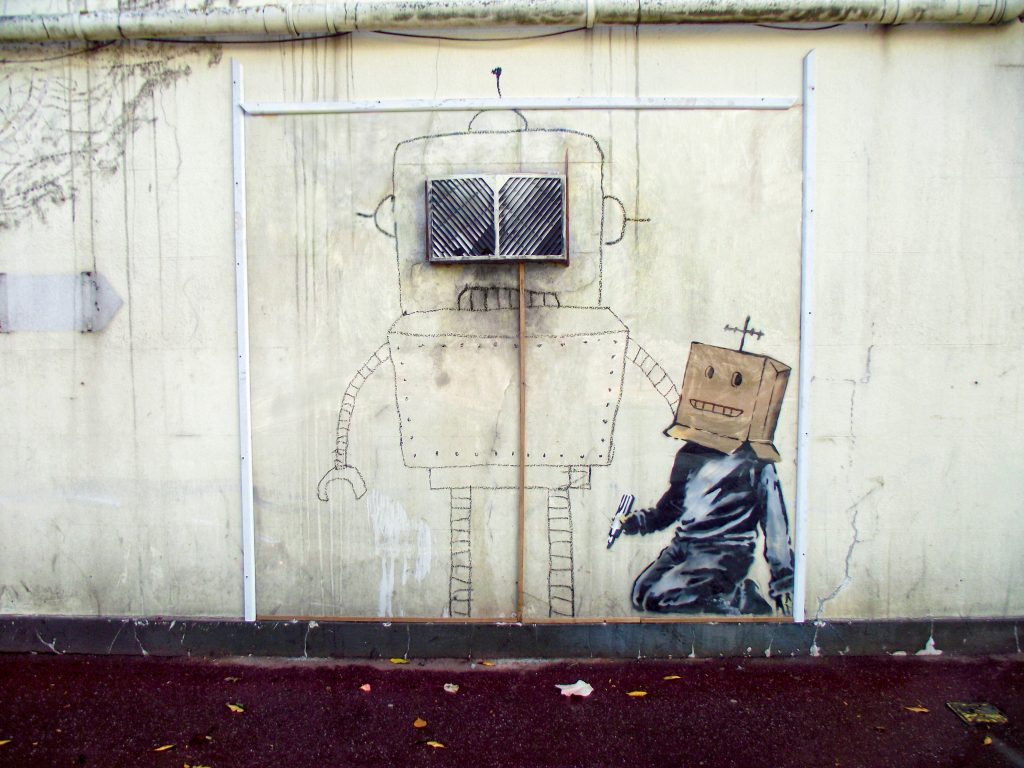 On the morning of October 4, 2010, the manager of the Grosvenor Hotel discovered this painting—which has been attributed to Banksy, a world-famous but anonymous English street artist—on an exterior wall. The Grosvenor Hotel overlooks the seafront in Torquay, a resort town in southern England.

Fast forward to May 2018 when the White House held a Summit with 40 tech companies, including the likes of Google and Amazon. The focus: handwringing over the inevitability of “job displacement” from automation and artificial intelligence.

So, we find ourselves at a curious point in history.

For a decade now, despite the wonders of Uber, Amazon and Apple, the U.S. has actually been in a productivity deficit. The definition of productivity is the reduction in inputs—labor and materials—per unit of output. In other words, our productivity deficit means that America is currently underinvested in automation technologies.

But now, we’re told, we are about to see a new kind of productivity that will spur economic growth, but for the first time in human history, it will also lead to the long-term net destruction of work.

Ever since the dawn of the industrial revolution, we have witnessed continual and profound advances in technologies that have improved productivity. In fact, the magnitude of labor-saving now expected to come from AI and robots won’t match what happened, for example, a century ago. In just 20 years, from 1910 to 1930, there was a 400 percent drop in labor hours needed per car manufactured, and a 700 percent decline in labor hours to produce a ton of steel. And those are not exceptions, but typical of what technology progress has brought to many industries over the past century and a half.

Over that time, despite this massive “labor saving” and despite population growth, which increased the total number of labor-seekers, 95 percent of job-seekers, on average, found employment. In other words, the unemployment rate has oscillated around 5 percent, despite serial technological disruptions.

Of course, there have been periods of high unemployment during that time span. But those episodes were caused not by technology but by poor policies and economic malpractice.

The essence of today’s dystopian argument about the future is, in the immortal phrase of every failed forecaster: This time it’s different.

The implicit, if not explicit, argument is that AI and robots are, well, different. Of course, the specific technologies underlying every revolution are different.

The central question is whether the effects of new technologies are different than in the past.

A core tenet of the peak jobs thesis is anchored in offering an analogy to the historical fact every schoolchild learns: Technology eliminated nearly all farm work. But there is something fundamentally wrong with using that model as a predictor for other work.

The critical difference between work associated with producing food compared to fabricating things and producing services is found on the demand side, not the productivity side of the equation.

Growth in demand for food is bounded by the combination of two obvious variables: population growth, plus the rise in per-person consumption for those underfed.

Population growth is slow and very predictable over very long periods. And there is only a maximum of a two-fold difference between the per capita calorie intake of a subsistence diet and that of wealthy nation.

Even modest gains in agricultural productivity—again, the rate of labor reduction per unit of product—can be far faster than the rate of growth in demand. Thus, one would expect, and we’ve seen, a rapid reduction in total farm-labor-hours needed.

Meanwhile, for the things we invent and fabricate, the demand growth isn’t limited like food but is essentially unlimited. This arises from an obvious fact, but one that seems to elude economists and forecasters: Engineers and innovators continually invent new things that create new demands.

Rising consumption of fabricated things—and the services they enable, such as tourism enabled by aircraft or entertainment enabled by computers—comes not just from increased wealth enabling more people to own what only a few had previously been able to afford. It also comes from the continual invention of new products and services that create new demands, which in turn create new requirements for jobs in both manufacturing and services.

There was no demand for cars or computers before their invention. The computing industry employed about 100,000 people circa 1960, compared to more than a million workers today.

The fact is global demand for manufactured goods—and for the services the new kinds of goods enable—is on the cusp of the greatest expansion in history. We are already seeing evidence of that and the collateral requirement for productivity from robots and AI to meet the scale of demand.

We’re long overdue for improving labor productivity in nearly every part of the service sector, especially healthcare. Over the past couple of decades, healthcare productivity—value added per labor-hour—has been stagnant. 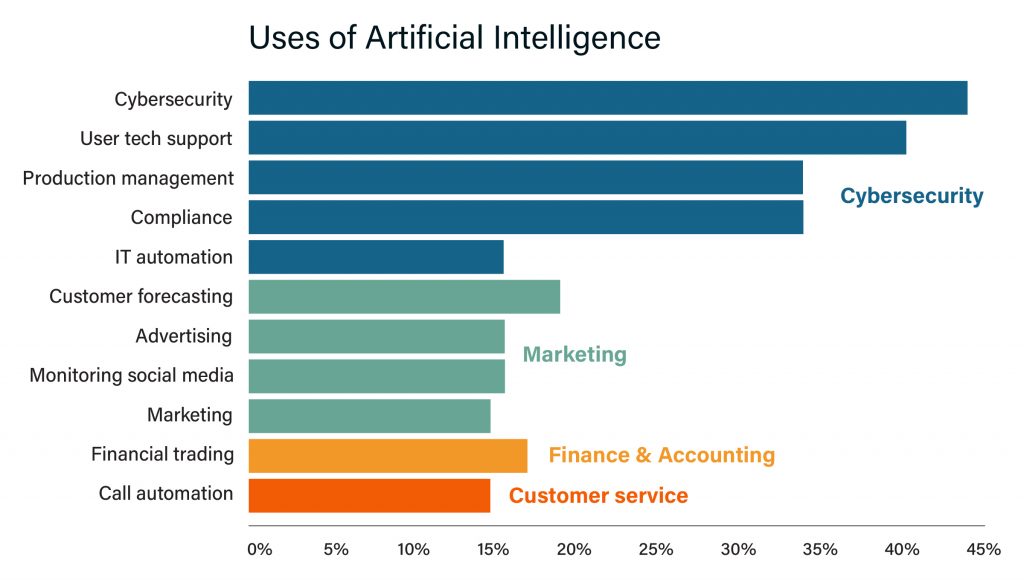 Adding knowledge automation won’t destroy work in healthcare, it will make it more affordable, better and, yes, expand employment.
We can look to recent history for some obvious examples. We’ve seen word processors replace typing pools, spreadsheets replace rooms full of accountants doing “ciphering,” software replace draftsmen and many more similar examples. But over these decades, both employment and the economy have grown.

Data from the Bureau of Economic Analysis shows that, on average, the industries that spent more on software increased rather than decreased employment. The data also shows that most industries are still underinvested in software. We should hope for software investment to accelerate.

The central challenge in the current transition era is as it has always been. It is not the prospect of the end of work. It is the moral and political imperative to deal with the inevitable loss of specific types of jobs and the related—and challenging—task to help a minority of workers find new jobs.

But this time, for the first time, the technology causing the disruption also constitutes part of the solution.

One can easily imagine developing social media algorithms similar to the kind that enable platforms such as Uber’s sharing and Netflix’s preference engines. AI will make it both easier and more efficient to manage the complex and inherently social process of helping displaced employees find new work, or requalify or retrain people for new kinds of work.

A central goal in engineering has always been to make technologies easier to operate by non-experts. AI in the future will become increasingly easy for everyone to use. That will democratize artificial intelligence. And that will inevitably help far more people become productive and greatly expand the base of so-called “knowledge workers” too.

And that might be the single feature of our new age that is in fact different from previous machine disruptions.

Mark Mills is a Manhattan Institute Senior Fellow, a Faculty Fellow in the McCormick School of Engineering at Northwestern University and a cofounding partner at Cottonwood Venture Partners, focused on digital energy technologies. Mills is a regular contributor to Forbes.com and writes for numerous publications, including City Journal, The Wall Street Journal, USA Today and Real Clear. Early in Mills’ career, he was an experimental physicist and development engineer in the fields of microprocessors, fiber optics and missile guidance. Mills served in the White House Science Office under President Ronald Reagan and later co-authored a tech investment newsletter. He is the author of Digital Cathedrals and Work in the Age Robots. In 2016, Mills was awarded the American Energy Society’s Energy Writer of the Year. 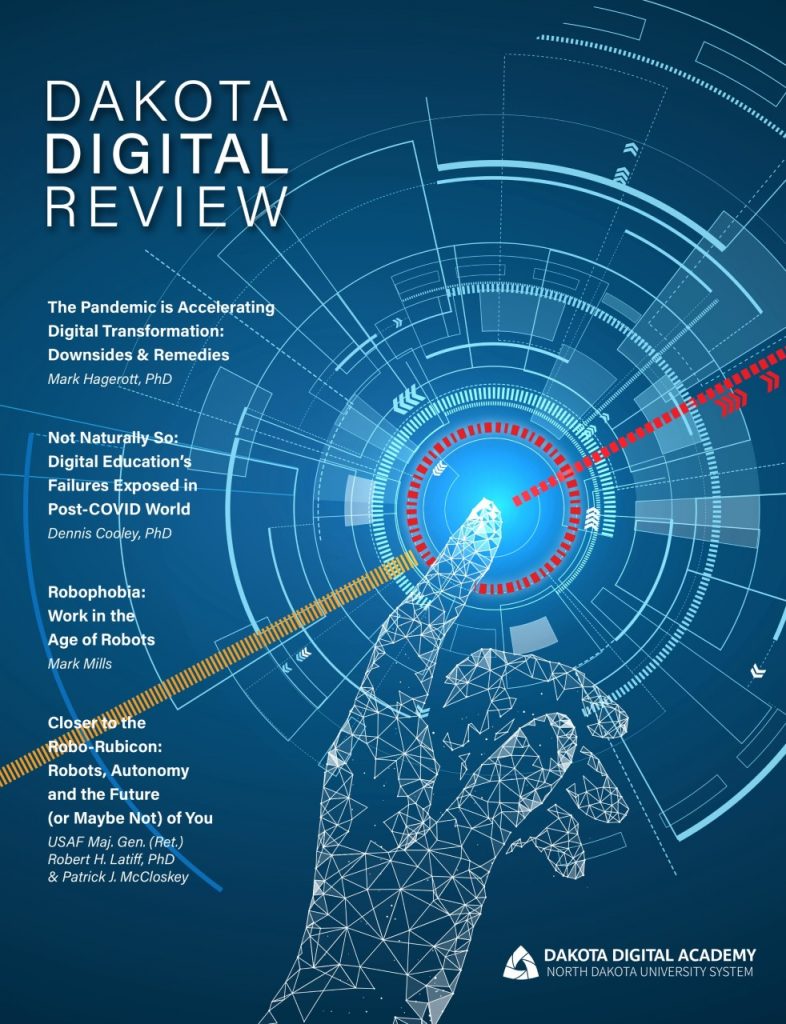