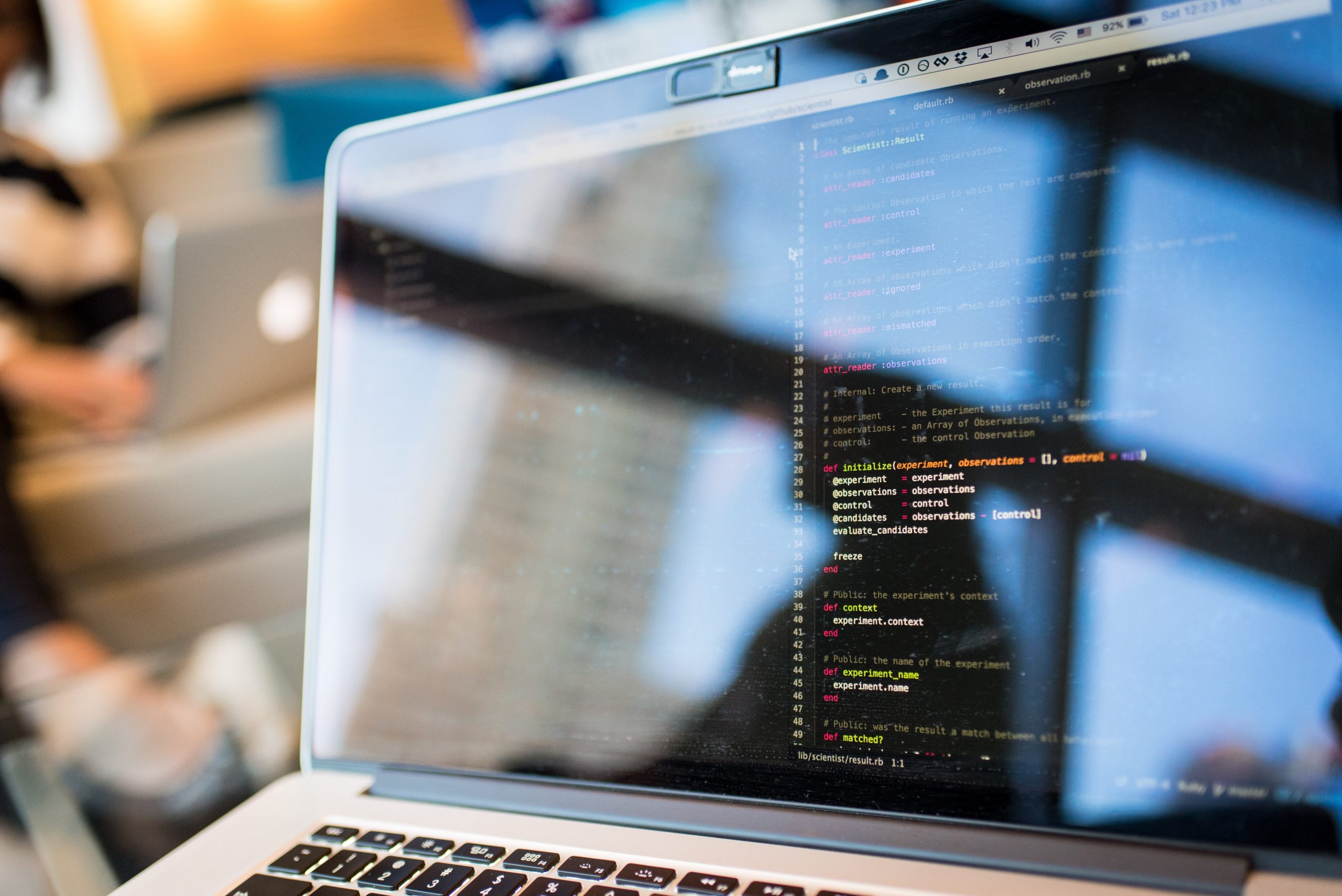 Introduction to the Dakota Digital Academy

Kendall E. Nygard, PhD, Director of the Dakota Digital Academy The Dakota Digital Academy (DDA) gained traction this fall with engagement by numerous faculty and administrators across the North Dakota University System (NDUS). Thanks to the vision of Chancellor Mark Hagerott, there is much DDA activity in designing and developing courses in the digital arena, configuring certificates and programs, creating partnerships and planning events. This activity surrounds the need for relevant training and education to serve learners and employers. We are ambitious and expect to accomplish a great deal in our state. We are committed to fostering access, opportunity, enfranchisement, inclusion and diversity. We believe in collaboration. Among DDA’s challenges is establishing synergy among the diverse NDUS institutions. With two research universities, four regional universities and five colleges, there are considerable differences in orientations, types of expertise and capacities. At DDA, we view these differences as sources of opportunities and 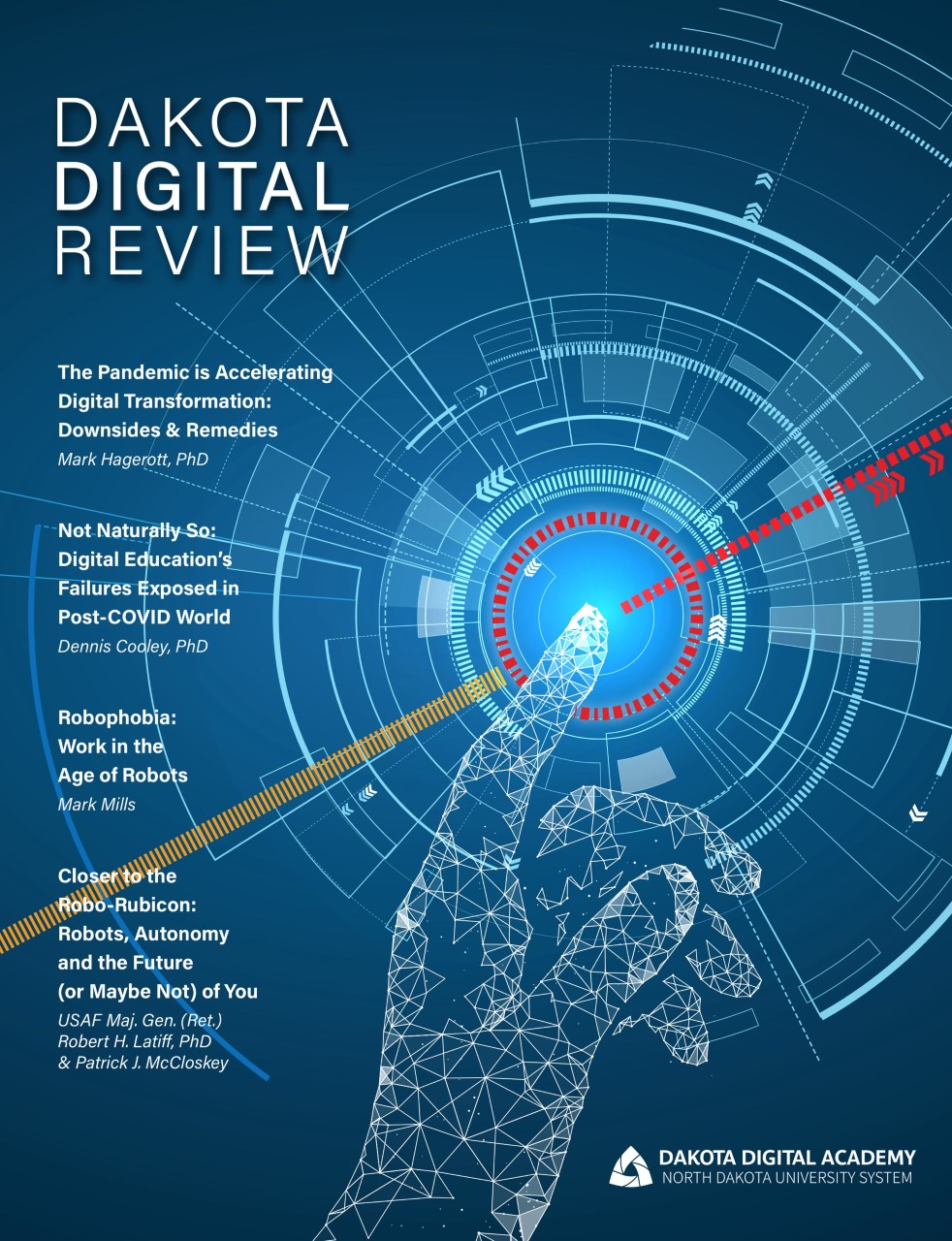 Patrick J. McCloskey The cartoonist Walt Kelly said it best, “We are confronted with insurmountable opportunities.” What sorcerer or ancient magician could have imagined what we take for granted today: video conferencing across continents, texting at 30,000 feet on a jet liner, data mining, robotic surgery. And this is just the beginning. Digital wonders we can’t envision yet will delight us and perform seeming miracles for the good of humanity. As cyber technologies become increasingly ubiquitous, however, their penetration into our personal, family, professional and social lives is accelerating, and their influence is growing. In response, DDA will offer courses in the profound social, ethical, legal and policy implications of the cyber sciences. To amplify DDA’s systemwide approach across 11 colleges and universities, and to engage and educate the general public, DDA now presents Dakota Digital Review, which is being published both in print and online. Dakota Digital Review will 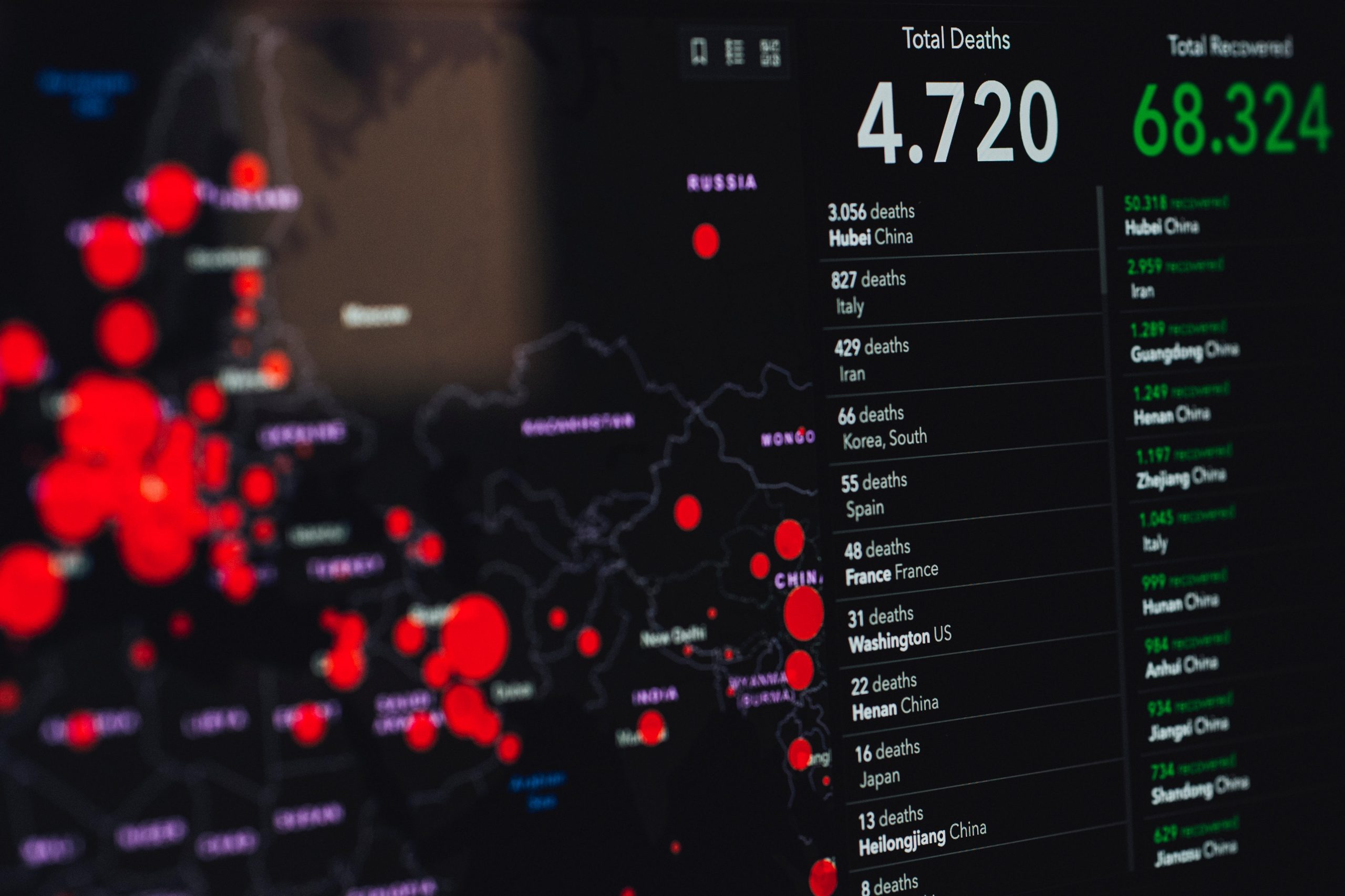 Supplemental Slides Mark Hagerott, PhD, Chancellor, North Dakota University System Human society faces disruption and tumultuous change far more unprecedented and historic than a pandemic.i Rapid, digital technological change is the big story, the paradigm transforming narrative, the potential birth-pangs for a post COVID-19 world that if we allow it, may privilege digital machine systems over humans and human-centric systems. Paradoxically, COVID mitigation policies may promote human welfare in the short term but undermine human community, health and culture in the long term. Furthermore, technological systems create their own inertia, and if not managed carefully, tend to “lock in” early decisions and patterns of use, making it difficult to reverse mistakes. It is thus imperative that our leaders act now to reconsider the unintended second and third order effects of our COVID responses. Otherwise, harmful consequences for human-centric systems, humanity and human values may occur and become “locked in” and

Patrick J. McCloskey At 7 p.m. on November 9, 1872, a fire started in the basement of a warehouse at the corner of Kingston and Summer Streets in Boston, Massachusetts. Two hours later, the fire was consuming a three-block radius. All 21 of the city’s fire engine companies responded. Even so, the fire advanced south quickly to the waterfront, incinerating docked vessels and wharves. By 6 a.m., the fire was roaring through the center of downtown and wasn’t contained until midday. In total, the fire destroyed 766 buildings, leaving a large swath of the city in smoldering ruins. A major reason the fire became so disastrous began in late September. In pastures around Toronto, Ontario, horses and mules started showing signs of a respiratory illness. By early October, this equine influenza spread across the southern border. Within a few weeks, influenza infected horses in Boston, New York, Philadelphia, Baltimore and 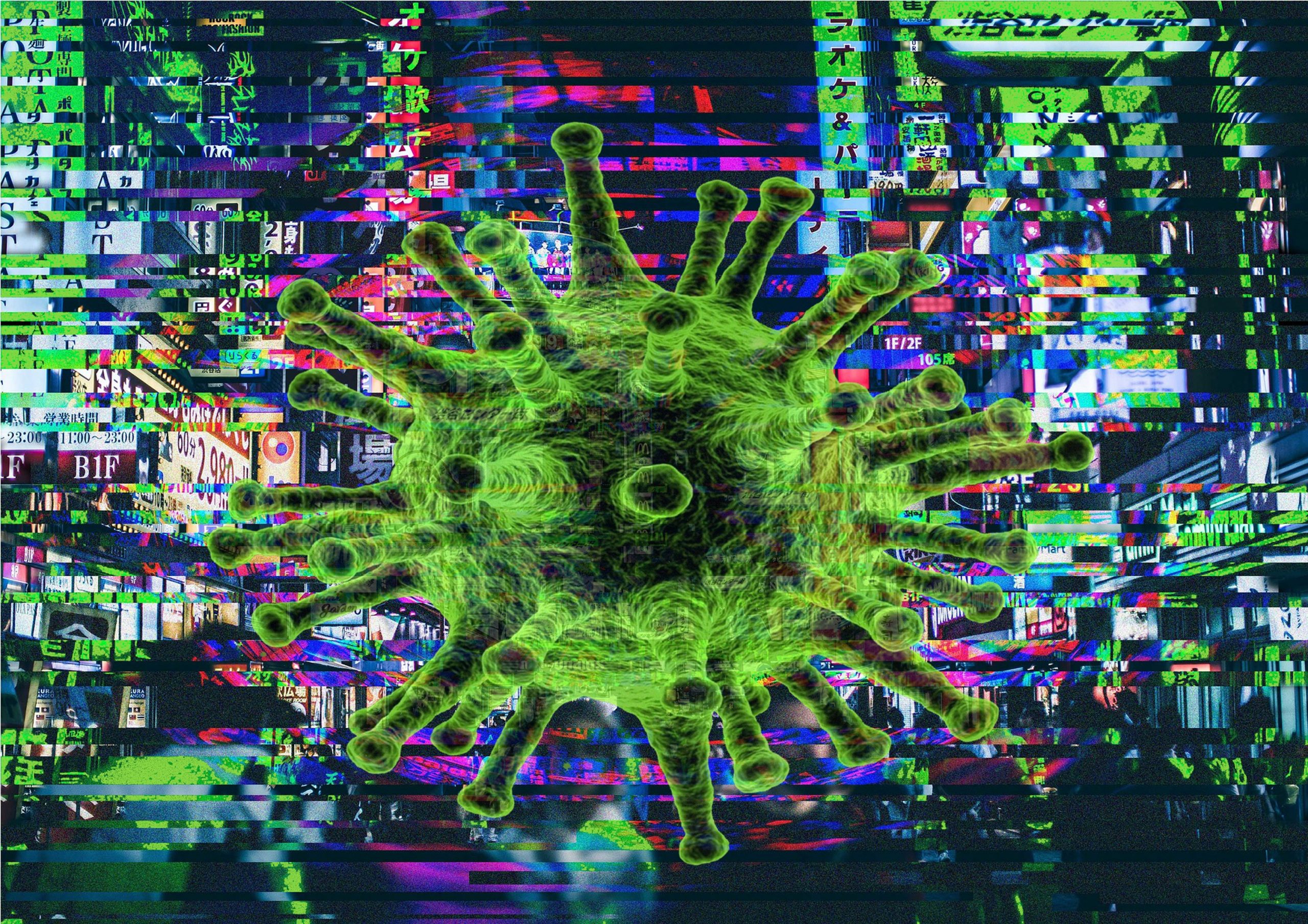 Not Naturally So: Digital Education’s Failures Exposed in Post-COVID World

Dennis Cooley, PhD, Professor of Philosophy & Ethics, North Dakota State University The road to Hell is paved with good intentions, we often hear. Considering the drive to online classes during the COVID-19 pandemic, that old trope can be updated: Privileged thinking does a nice job icing the pavement. In an extraordinarily short period of time, the pandemic shifted American education rapidly from the primarily face-to-face tradition to mostly online teaching. Perhaps that rapid transformation is why online education’s three main failures, each based on a lack of understanding of how human beings engage with each other in their world, became quickly apparent. These failures might cause students and parents to wonder why they are paying so much for so little practical engagement and results. At the same time, faculty members might struggle to believe they are providing adequate value and fulfilling their vocation. Online education has proponents for several 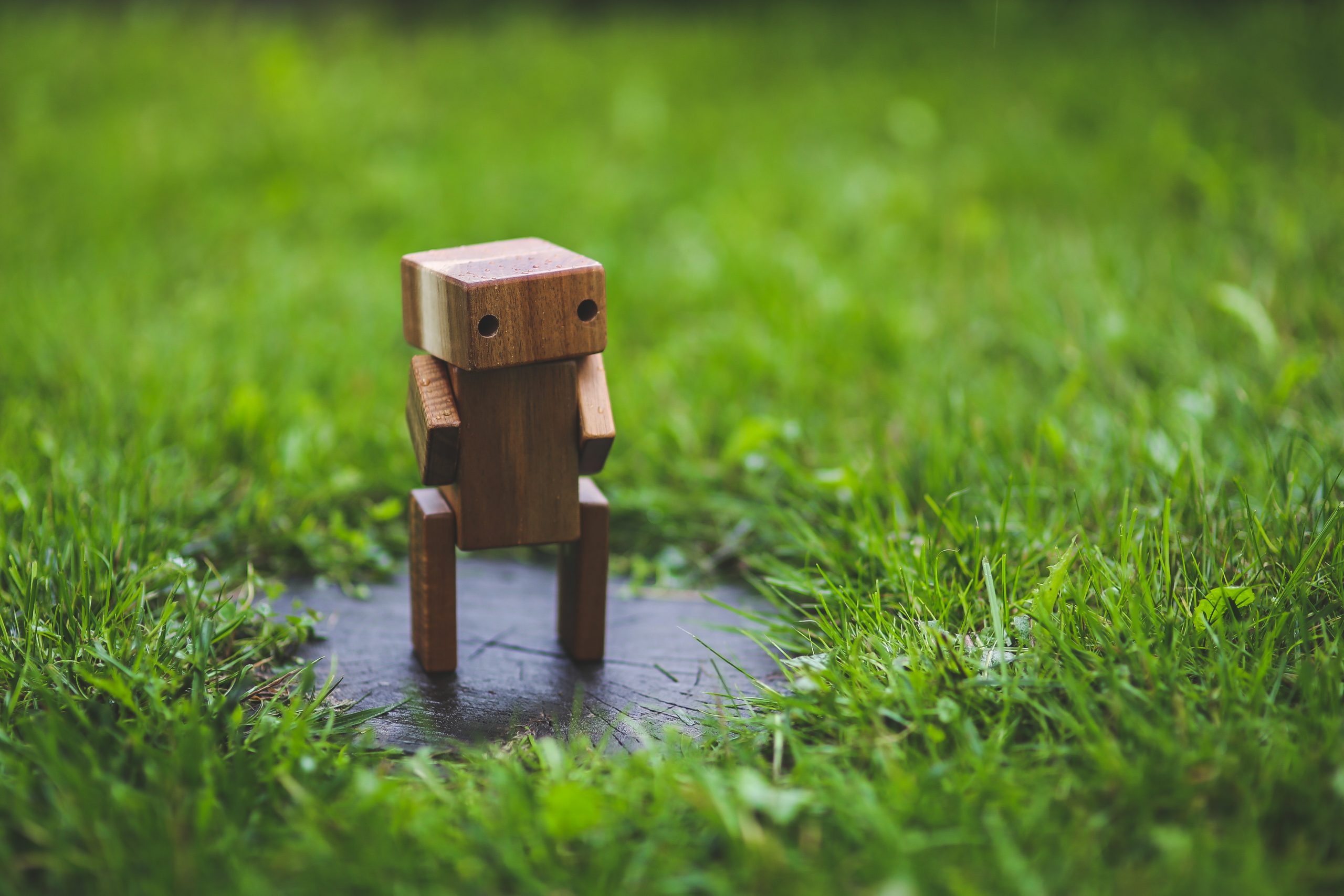 Robophobia: Work in the Age of Robots

Mark Mills, Senior Fellow, Manhattan Institute The nation today is still recovering from the unprecedented effects of widespread shutdowns in response to the coronavirus. After achieving a record low level of unemployment prior to the pandemic, economies everywhere have returned to the challenge of rebuilding. Many pundits and futurists now claim that the labor-savings about to come from algorithms, artificial intelligence (AI), automation and robots, will take so many jobs that employment levels will never recover. In response, this will require, the proponents argue, the creation of a universal basic income, not just for the temporarily unemployed, but for those doomed to be never-again-employable. We’ve seen this movie more than once. In 1961, President John F. Kennedy delivered a message to Congress focused on what he called “the inevitability” of job destruction from automation. He created an Office of Automation and Manpower and proposed that Congress fund training programs and 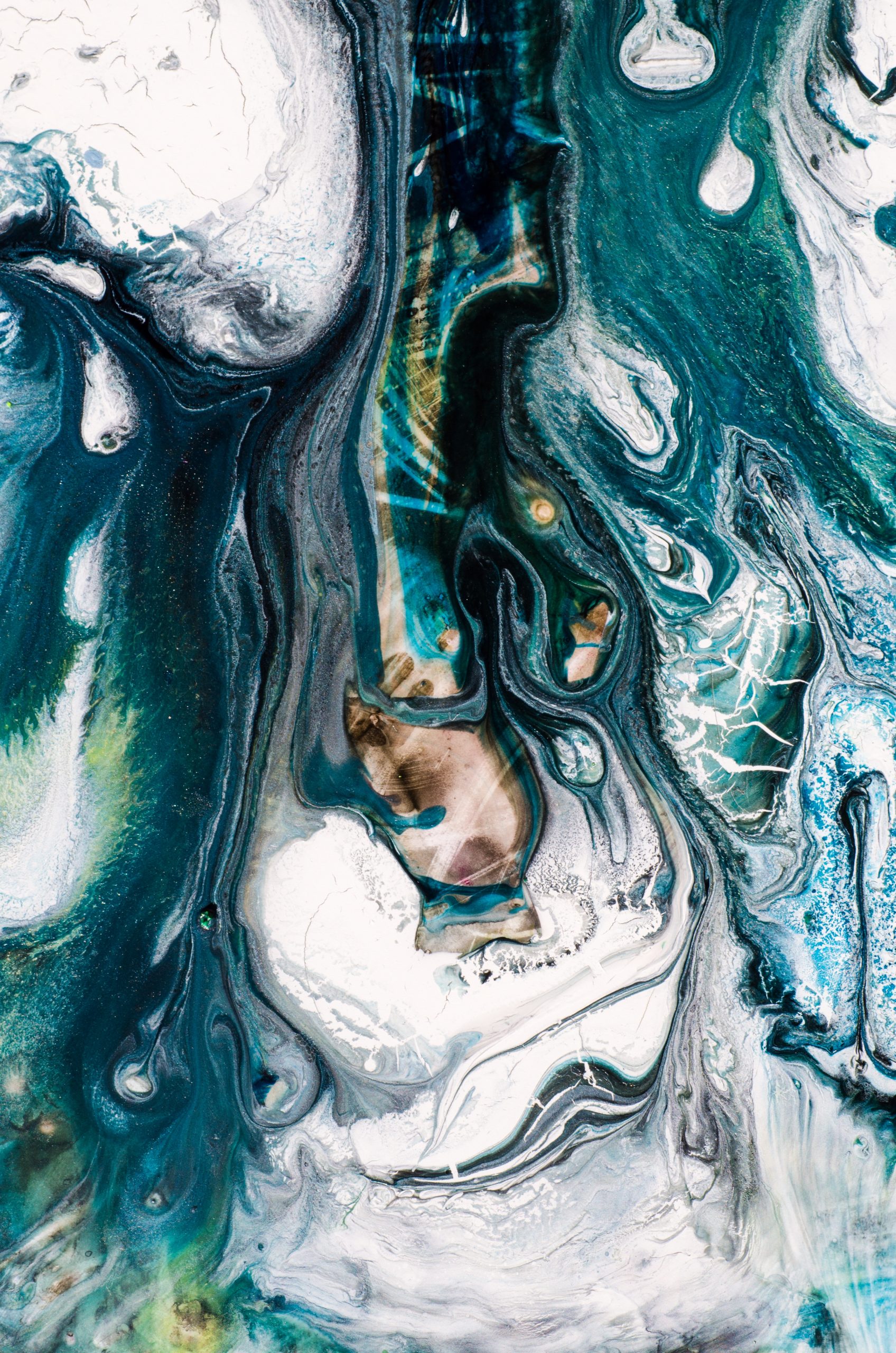 Here, There, and Everywhere: Human vs Cyber Space in Art

Interview with David Borlaug, President, The Capital Gallery Recently, we interviewed David Borlaug, the president of The Capital Gallery, about the differences and synergies between physical space and cyberspace in art. The gallery is located downtown in Bismarck, North Dakota. In 1980, in Washburn, ND, Borlaug co-founded Farm & Ranch Guide, which became the most popular farm newspaper nationwide. In the early 1990s, he formed the Lewis & Clark Fort Mandan Foundation and, since 2000, served as president. Borlaug also served as chairman of the board of Prairie Public Broadcasting. Currently, Borlaug serves as the vice president of both the Central Dakota Humane Society and the Bismarck-Mandan Symphony Orchestra. In 2016, he moved to Bismarck to establish The Capital Gallery, which operates as both a museum and a retail art store. Here Dakota Digital Review: In today’s world, with everything going virtual—especially during the pandemic—why is a brick-and-mortar art gallery 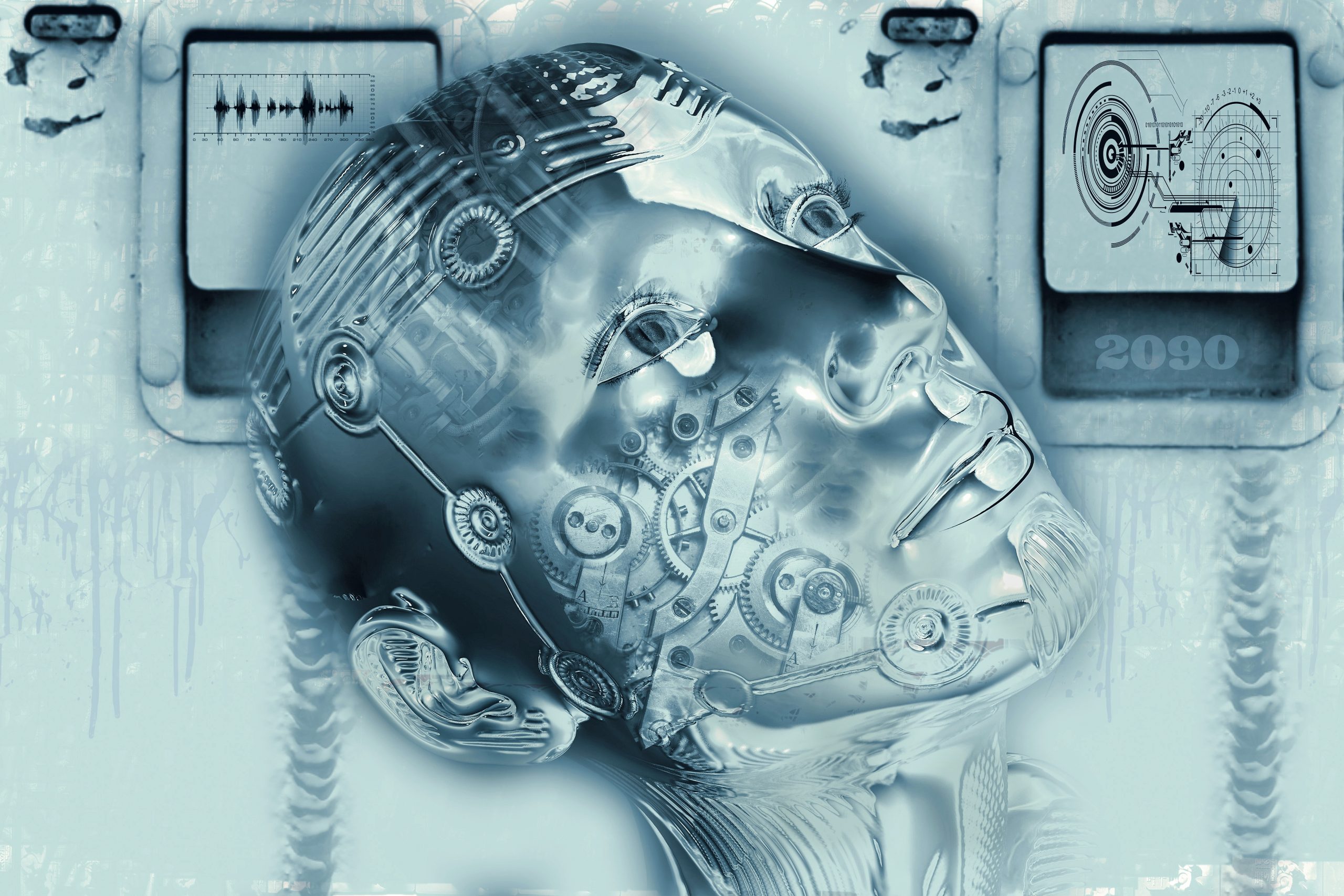 Closer to the Robo-Rubicon: Robots, Autonomy and the Future (or Maybe Not) of You

USAF Maj. Gen. (Ret.) Robert H. Latiff, PhD and Patrick J. McCloskey Seven years ago, Maj. Gen. Robert Latiff and I wrote an opinion article for the Wall Street Journal, titled “With Drone Warfare, America Approaches the Robo-Rubicon.” The Week, which reviews newspaper and magazine stories in the U.K. and U.S., highlighted the article in its “Best Columns-US” section. “If you think drone warfare has created some tricky moral dilemmas, said [Latiff and McCloskey],” The Week began its précis, “just wait until we start sending robotic soldiers into battle.” “Crossing the Rubicon,” of course, refers to Julius Caesar’s irrevocable decision that led to the dissolution of the Roman Republic, a limited democracy, and ushered in the Roman Empire, which would be run by one or more dictators (aka, emperors). On January 10, 49 BC, General Caesar led a legion of soldiers across the Rubicon River, breaking Roman law and making 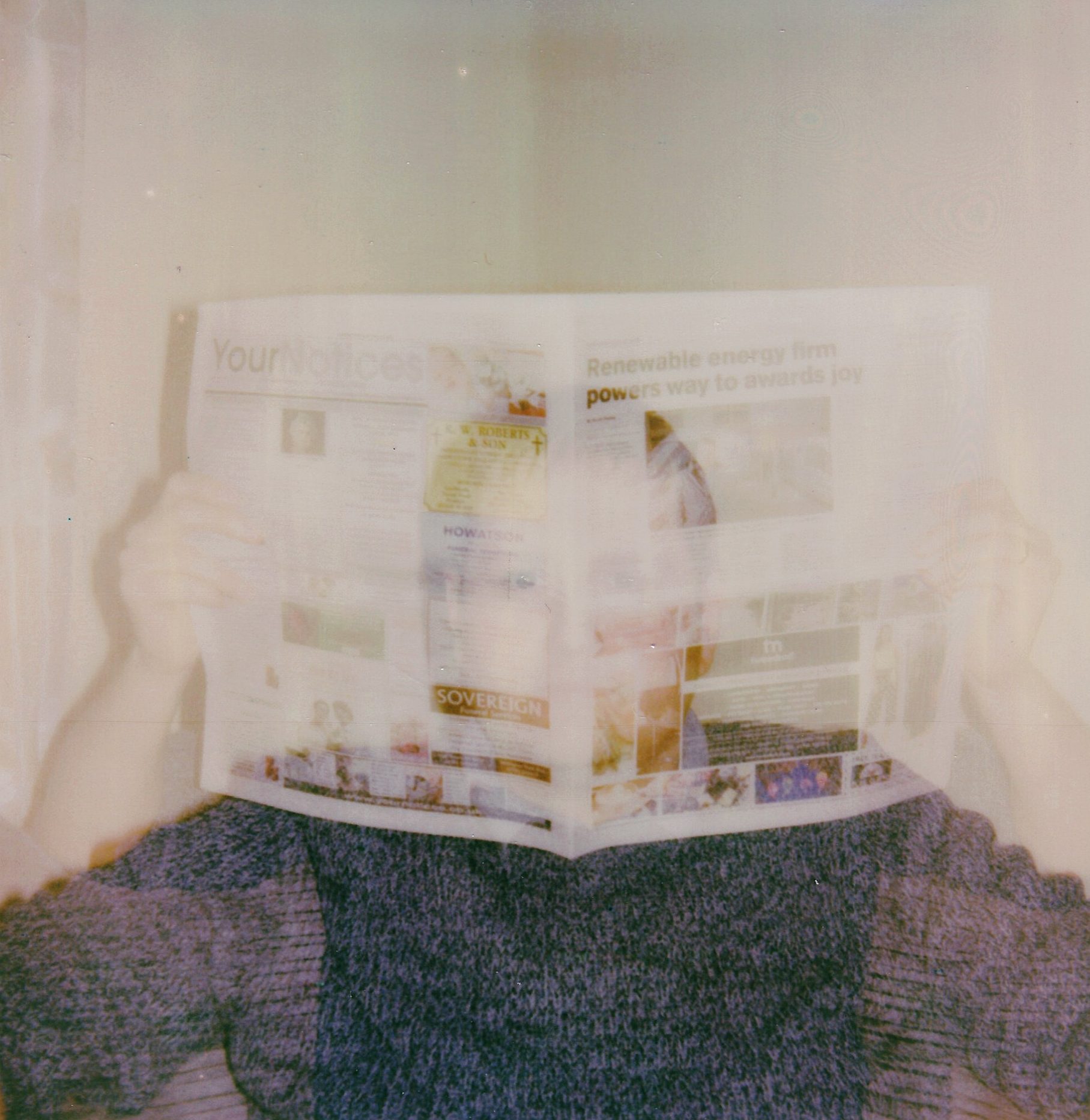 News Desert: Losing Our Local Newspapers in the Digital Age

Samuel G. Freedman A newsboy sells copies of the Bismarck Tribune on Main Street. Photograph by John Vachon for the Office of War Information, 1942. One day last year, my sister approached me to ask a journalistic favor. Carol owns a chocolate shop in Somerville, New Jersey, a county seat about 40 miles west of New York City, and the place where I began my reporting career in 1975. The borough’s government, Carol told me, was going to quadruple the charge for on-street parking from 25 cents to one dollar an hour and cut back on the free evenings and holidays. Worse yet, the price hike was supposed to take effect at the start of the Christmas shopping season. Along with a group of other downtown merchants, Carol was furious, because their big competitors in a mall several miles away had acres of free parking to entice customers. So the 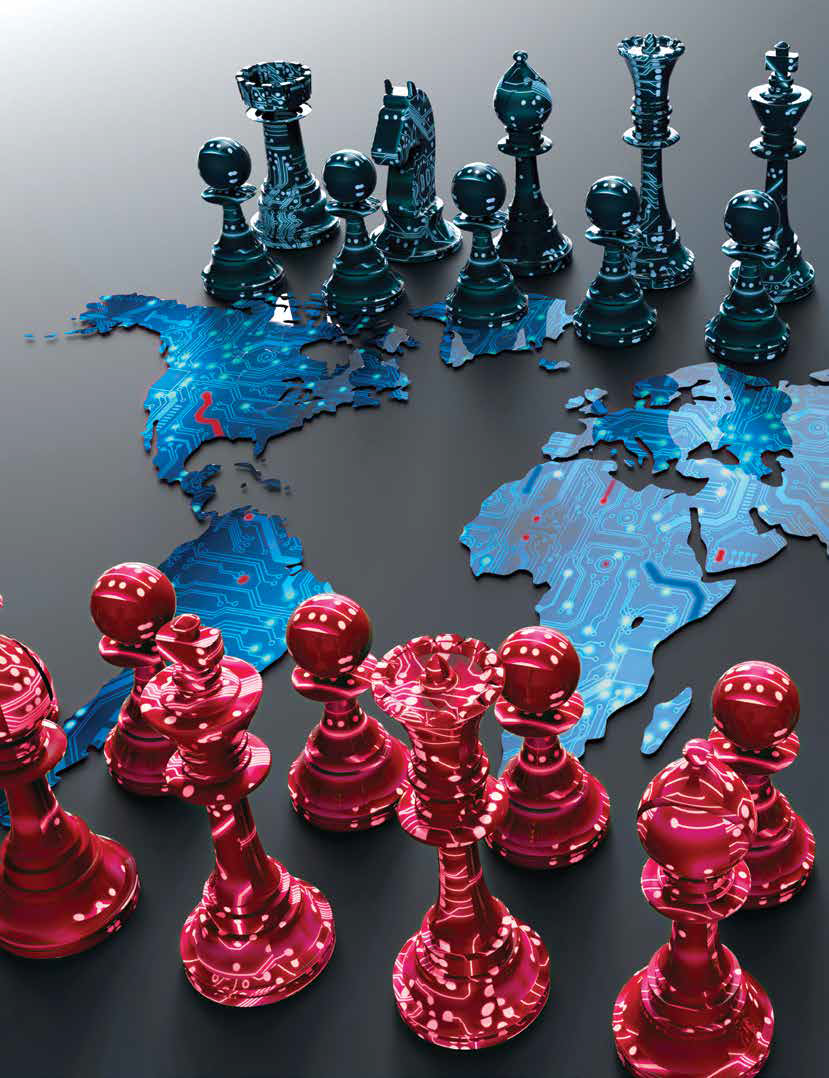 Jeremy Straub, PhD, MBA, Assistant Professor of Computer Science, North Dakota University System It’s easy to confuse the current geopolitical situation with the 1980s at the end of the Cold War, when tensions between the Soviet Union and the United States were highest. The Cold War began after World War II and ended with the dissolution of the Soviet Union in the early 1990s.i During this period, the Soviets and her allies and the U.S. and our allies built advanced weaponry in anticipation of military conflict and even World War III. ii The weapon of choice then was nuclear missiles, while today it’s software, whether it’s used for attacking computer systems or targets in the real world.ii Russian rhetoric about the importance of artificial intelligence (AI) is picking up—and with good reason. As AI software develops, it will be able to make decisions based on more data, more quickly than 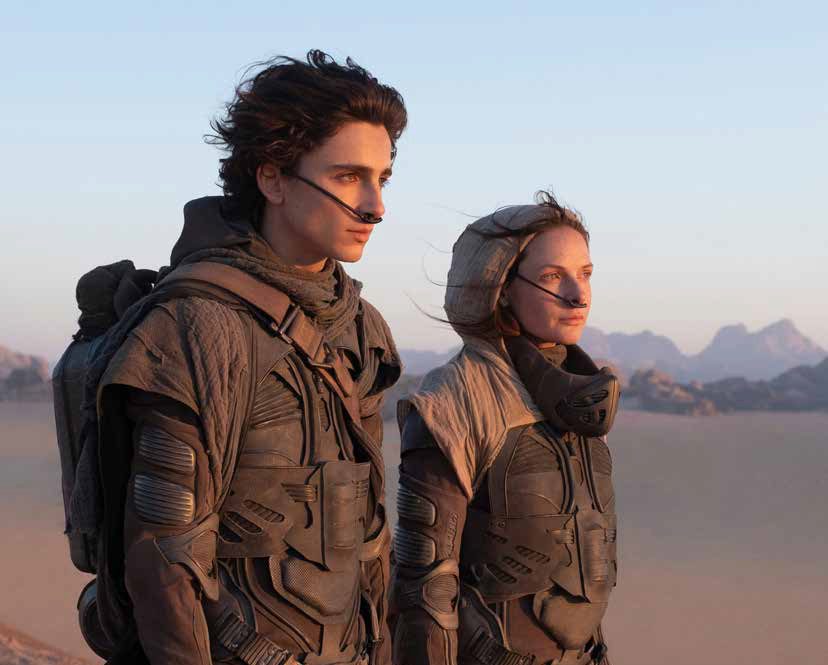 Patrick J. McCloskey Opinion Above image: Left to right, Timothée Chalamet, who plays Paul Atreides, and Rebecca Ferguson, who plays Lady Jessica, his mother, in “Dune.” Imagine someone growing up in a vast desert. One day, this young man or woman leaves home and eventually comes to a river for the first time. Down this person sits and decides to wait until the river runs by. We can chuckle at the quaint absurdity, but this is exactly what Warner Bros. is asking theatre owners across the country to do. On December 3, Warner Bros. announced that the entire 2021 movie calendar will stream on HBO Max (which its parent company, AT&T, owns) simultaneously with releases in brick-and- mortar theaters. This calendar includes “The Little Things” starring Denzel Washington, as well as sci-fi blockbusters such as “Dune.” Traditionally, theaters are given about 90 days of exclusive playing rights before movies are

If you would like to discuss the courses on the implications of digitization, suggest stories to be covered in Dakota Digital Review­­­­ or offer support, please contact Patrick J. McCloskey at (701) 955-767 or patrick.mccloskey.1@ndus.edu. The NDUS Foundation is a 501(c)(3) organization.